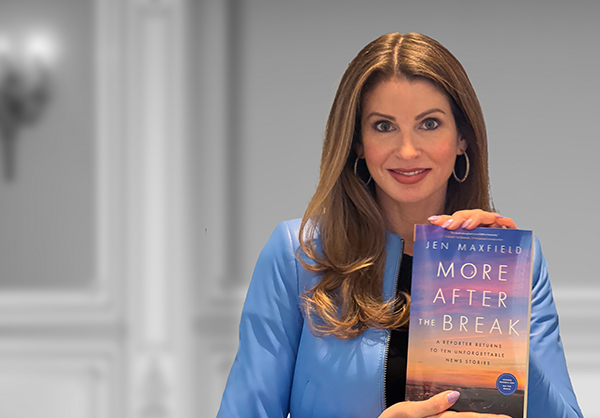 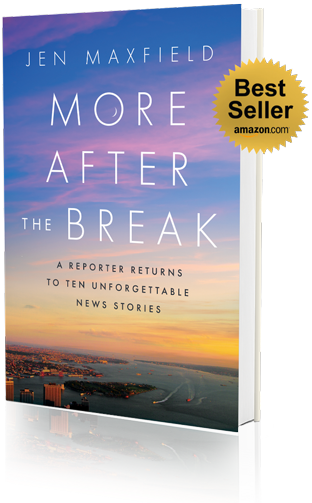 More After the Break:

In this beautifully written book, Jen Maxfield shows that being a caring and compassionate human being makes you a better journalist. More After the Break strengthens your faith in humanity, and not incidentally, in the still noble profession of journalism. Gary Tuchman CNN National Correspondent

An instant Amazon bestseller the day it was announced for preorders, More After the Break takes readers on a dramatic ride-along in the TV news live truck. Based on her two-decade career as a New York City news reporter, Jen Maxfield writes about everything from the moment she gets the call to head to breaking news, to arriving at chaotic scenes, to knocking on doors of families who are grieving the loss of a loved one. 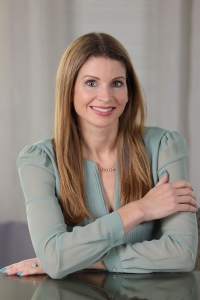 Maxfield revisits ten memorable stories, describing in heart-pounding detail how the events unfolded, through the eyewitness perspectives and her own. From a young man who lost both legs in a ferry crash, to an endurance athlete with Stage-Four lung cancer; from a fifth grader on a doomed field trip, to an Ivy League undergrad sentenced to decades in prison; from a young woman who gave her life for an animal, to a Wall Street executive on an ill-fated bike ride, Maxfield introduces readers to unforgettable people who will inspire you with their hopefulness, even when confronting life’s greatest heartbreaks.

Maxfield describes the challenge of reporting on deadline while still trying to offer compassion and empathy to people who are suffering. Returning to the families years—even decades— after their stories were featured on the news gives Maxfield an opportunity to ask the burning questions she had always pondered: what happened after the live truck pulled away? What is the rest of the story? 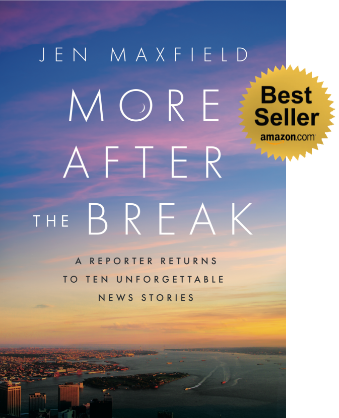 MORE AFTER
THE BREAK

“For a reporter accustomed to writing 90 second news stories, all I can say is that Jen Maxfield should be writing more books! More After the Break is a vivid and moving account of people’s stories, written by a journalist who holds her subjects in high regard.” Bill Bradley US Senate (1979-1997) and New York Knicks (1965-1977)

“The best journalists get into the business because they genuinely care about the good people they cover, as well as the good people who watch, read, and listen to their stories. Jen Maxfield is precisely that kind of journalist. More After the Break strengthens your faith in humanity, and not incidentally, in the still noble profession of journalism.” Gary Tuchman CNN National Correspondent

“At a time when journalists and journalism are increasingly under attack, Jen Maxfield offers a compelling and heart-warming look at the industry and its practitioners. More After the Break is a must-read for aspiring journalists who are sometimes fed the message that sensitivity and compassion are antithetical to success in this business.” Charles F. Whitaker Professor & Dean, Medill School, Northwestern University

“More After the Break is an extraordinary look into journalism and the journalist who represents the best in our profession. Jen takes us along on her intense and so often heartbreaking journey of service, and gifts us with the broader impact the stories she covers continue to have on families, society, and ourselves. What an important and impactful work!” José Díaz-Balart MSNBC, NBC News, and Telemundo Anchor

“More After the Break offers an essential perspective we rarely consider: what happens to those who’ve been in the spotlight after the news moves on to the next big story? Jen Maxfield offers a compelling insider’s view, and a sense of humanity beyond the headlines. A must-read for anyone interested in the future of journalism.” Claire Shipman New York Times bestselling author and journalist

“More After the Break is quintessential New Jersey: gritty, searing, and yet hopeful. From Katrina to COVID, Jen unveils the "workings of the media," and, more importantly, shares the painful stories of tragedy, hope, and uneasy redemption in contemporary America.” James McGreevey Chair, New Jersey Reentry Corporation, Former Governor of New Jersey (2002-2004)

“It's been said that only two types of people run towards disaster while others are fleeing: first responders and reporters. Jen Maxfield shows the compassionate, helping side of journalism in a way I've never before seen. We watch the news and hope that things will turn out okay for those involved, but we never knew the answer until now.” Stephen D. Jones Captain (Ret.) NJ State Police

“In a book which has all the immediacy and impact of her own TV news reporting, Jen Maxfield shows us not only how the news is made (sometimes at great risk), but why it matters.” Michael Korda Author, Editor-in-Chief Emeritus, Simon & Schuster

“In the fast-paced world of technology, where we have so much access to information, we often forget what good journalism is supposed to be about: stories that impact our communities told with objectivity and empathy. More After the Break validates the reason why local journalism still matters in the age of technology.” Jared Grusd Tech Executive and Former HuffPost CEO

“Moving and unforgettable, More After the Break offers deeply empathetic portraits of tragedy, loss, and the indomitable power of the human spirit. Maxfield tells her subjects’ stories with skill and compassion.” Amanda Brown Author, Legally Blonde

“This is a book every young journalist/blogger should read. Jen Maxfield’s stories will inspire you and you'll see the compassion and heart it takes to cover big news events in the nation’s largest TV market. This is not fake news, it's the real deal.” Diana Williams Longtime Anchor, Eyewitness News (ABC NY)

“I first met Jen Maxfield in 2000 when she interviewed me for a story. She had just started her career in television, and even then, I could tell her insightful and compassionate skills would serve her viewers well and lead her down the path to become an exceptional reporter. This book is the culmination of decades of storytelling and connecting with individuals of all walks of life.” Adam Weitsman Entrepreneur

“My Columbia Journalism professor Jen Maxfield has written a book that isn't just a behind-the-scenes account, it's a deeply personal story that demonstrates that the best journalism requires courage and compassion. This book is a treasure for any reporter starting their career or anyone who wants to understand all it takes to bring news stories to life.” Meridith McGraw National Political Correspondent, Politico

“More After the Break is a powerful, highly insightful, and important gem! Every broadcast journalist and aspiring broadcast journalist should read and absorb this book! It is also an illuminating and compelling read for anyone who wants to learn about some of the stories behind the stories that they may well have watched on their evening newscasts.” Ken Lindner Author of “ASPIRE HIGHER; How to Find the Love, Positivity, and Purpose To Elevate Your Life and the World!”

“More After The Break is beautiful and refreshing in its ability to truly see, hear, understand, value, and honor the individuals who lived the story. Jen Maxfield's desire and ability to revisit these people and their stories reflects her human-centered approach throughout her accomplished career.” Ethan Beute Wall Street Journal bestselling coauthor of Human-Centered Communication and Rehumanize Your Business

“Jen gets the news cranking like Kendrick Lamar gives us bars. NY/NJ these are your stories and here's to a reporter that never forgot! I give this book 5 flex bombs!” Funk Flex NYC Radio and DJ Legend

“A moving and gripping portrayal of what it's like to be in the trenches, Maxfield offers a revelatory glimpse at the life of a compassionate and dedicated TV journalist. For anyone who's ever wondered what's really going on behind the scenes of a breaking news story, this book is a must read.” Gigi Stone Woods TV News Anchor

“Over her years as one of the most reliable reporters on the ground, Jen Maxfield brings the news home, making it relatable and making it count. Her stories are about people, their struggles and their successes. With Jen, there’s always more after the break, more that’s worth watching and worth listening to.” Ron Insana Senior Analyst, CNBC

“More After the Break embodies key elements of what I teach my students: we have a responsibility as journalists to serve the public in a way that is ethical and empathetic. Jen flawlessly pens narratives in this book that move us. It is a must read for budding and veteran journalists.” Anthony Adornato Journalism Professor, Ithaca College

“What makes Jen Maxfield an extraordinary news reporter is that she seamlessly weaves in a sense of empathy, spirit and compassion to her reporting. The family that suffers a tragedy, the heroism of the first responder and the toll weather and natural disasters have are all, ultimately, human stories.” Rabbi David-Seth Kirshner Past President, New York and New Jersey Board of Rabbis

“I have had the pleasure of teaching Jen as a student and teaching with her, both at Columbia’s Graduate Journalism School. I admit that I shed a few tears at the emotional connection that she has brought to life in this compelling book. It’s a must read for anyone who cares about good journalism. It also reminds us of why we do this work!” Lennart Bourin Affiliate Faculty, Emerson College Journalism Department

“What's most compelling about More After the Break isn't even the amazing stories and storytelling. It's the feeling you're left with afterwards. I hired Jen Maxfield for her second job in news back in 2001, and I am thrilled to say she’s written a book about more than just journalism. It’s a book about people.” Jim Tortora Former News Director, WIXT/WSYR Syracuse NY

“In 2017, my organization honored Jen Maxfield as a ‘Woman to Watch.’ Yet, through her beautifully written More After the Break, Maxfield connects us more deeply with the lives she has given us to watch. This is a powerful book that gives readers not only a glimpse of the life of a journalist, but at the heart of one who understands how her work changes our world.” Meredith Jacobs CEO, Jewish Women International and Author, Just Between Us

“In her exquisitely written book, More After The Break, Jen Maxfield revisits some of the most heart-wrenching and memorable news stories of the past two decades. Jen has compiled a truly inspirational account of what happens when today’s headlines become yesterday’s news.” Erika Katz Leading parenting expert and best-selling author of Coach Parenting

“Jen is a dedicated volunteer with Center for Food Action in New Jersey, an agency that cares for the poorest and most vulnerable members of our society. As Martin Luther King, Jr. said, ‘You only need a heart full of grace. A soul generated by love.‘ My friend Jen most definitely has a heart full of grace and a soul generated by love. This comes through in her many contributions to CFA and in More After the Break, an absolute must read.” Patricia Espy Center for Food Action

“Sometimes dangerous and always rewarding, being a reporter is more than a job, Maxfield asserts: it is a heavy responsibility that, if assumed without care, can have severe consequences… More After the Break is a moving memoir about what journalism really entails, both for reporters and their subjects.” Foreward Clarion Review

“With curiosity, humility, and respect, Maxfield follows up with ten remarkable people…she presents these harrowing stories with nail-biting intensity while affording her subjects the space and humanity to discuss their lives… impossible to put down.” Editor’s Pick Publisher’s Weekly BookLife 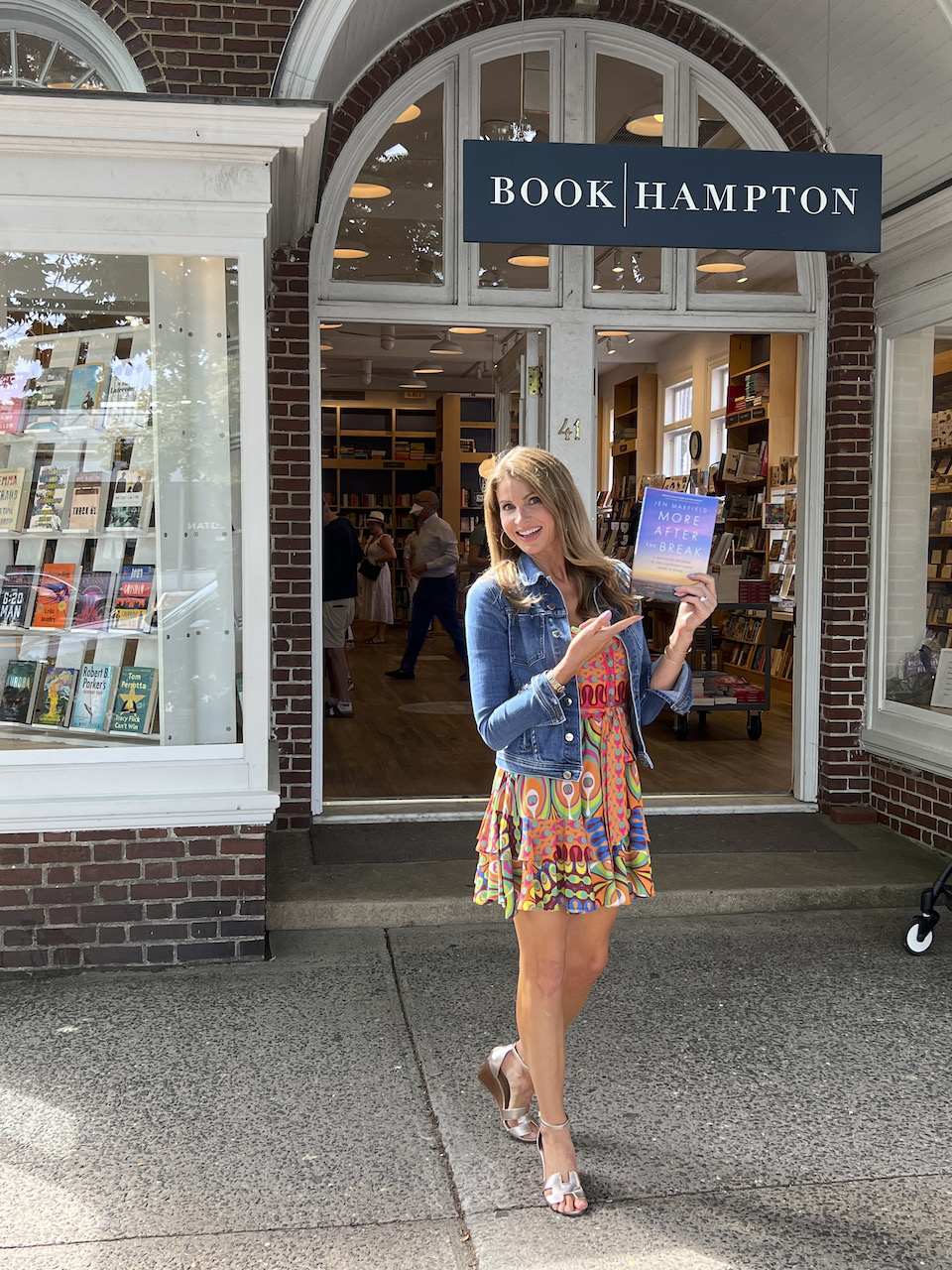 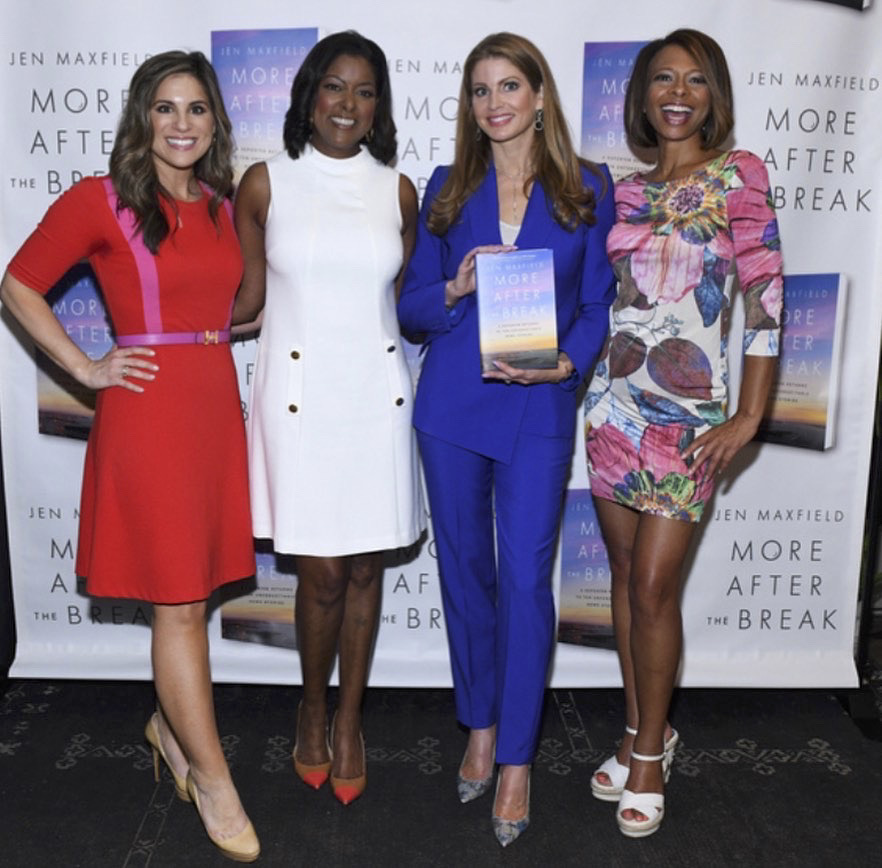 Jen in purple with 3 Women in NYC News 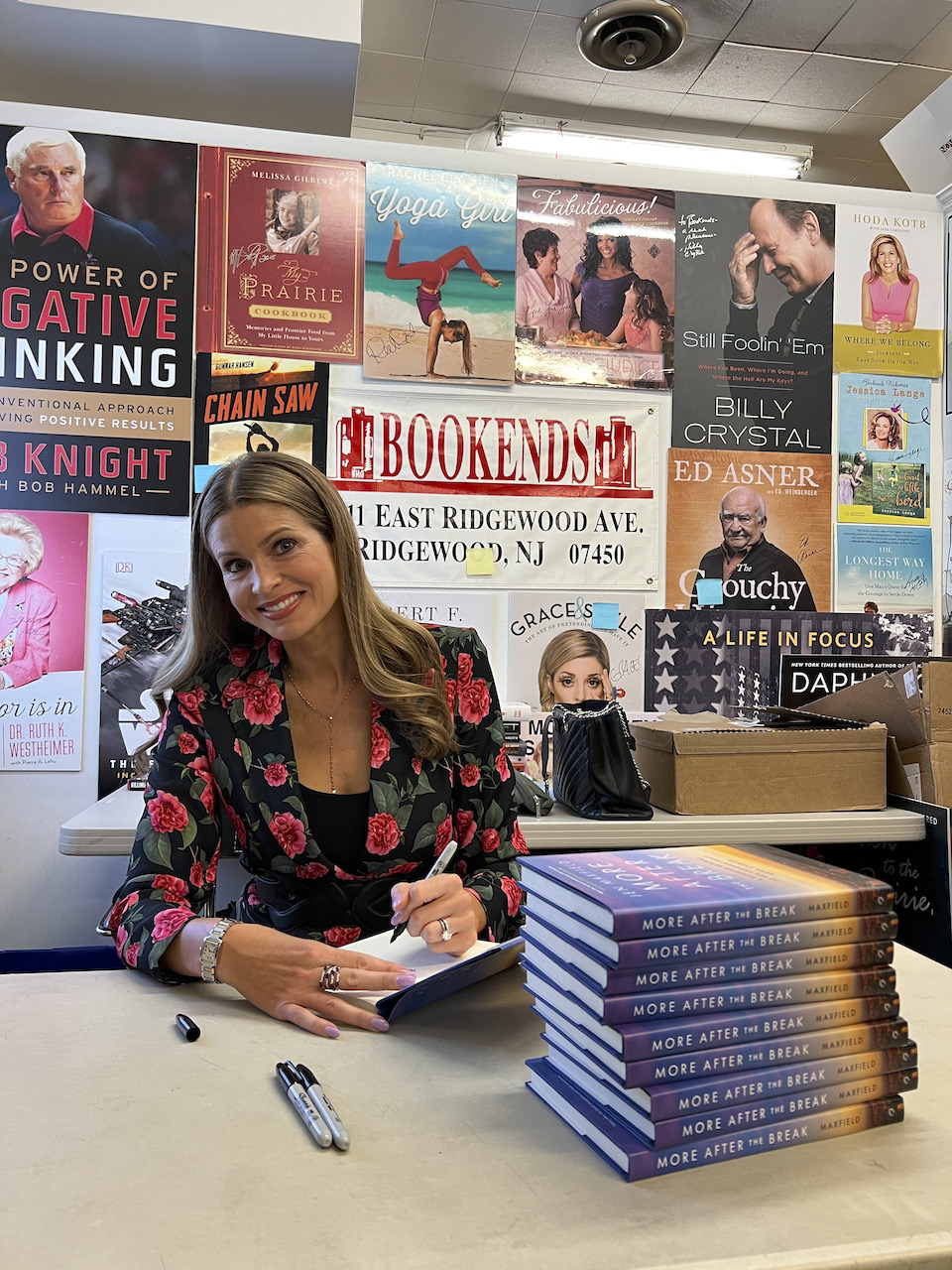 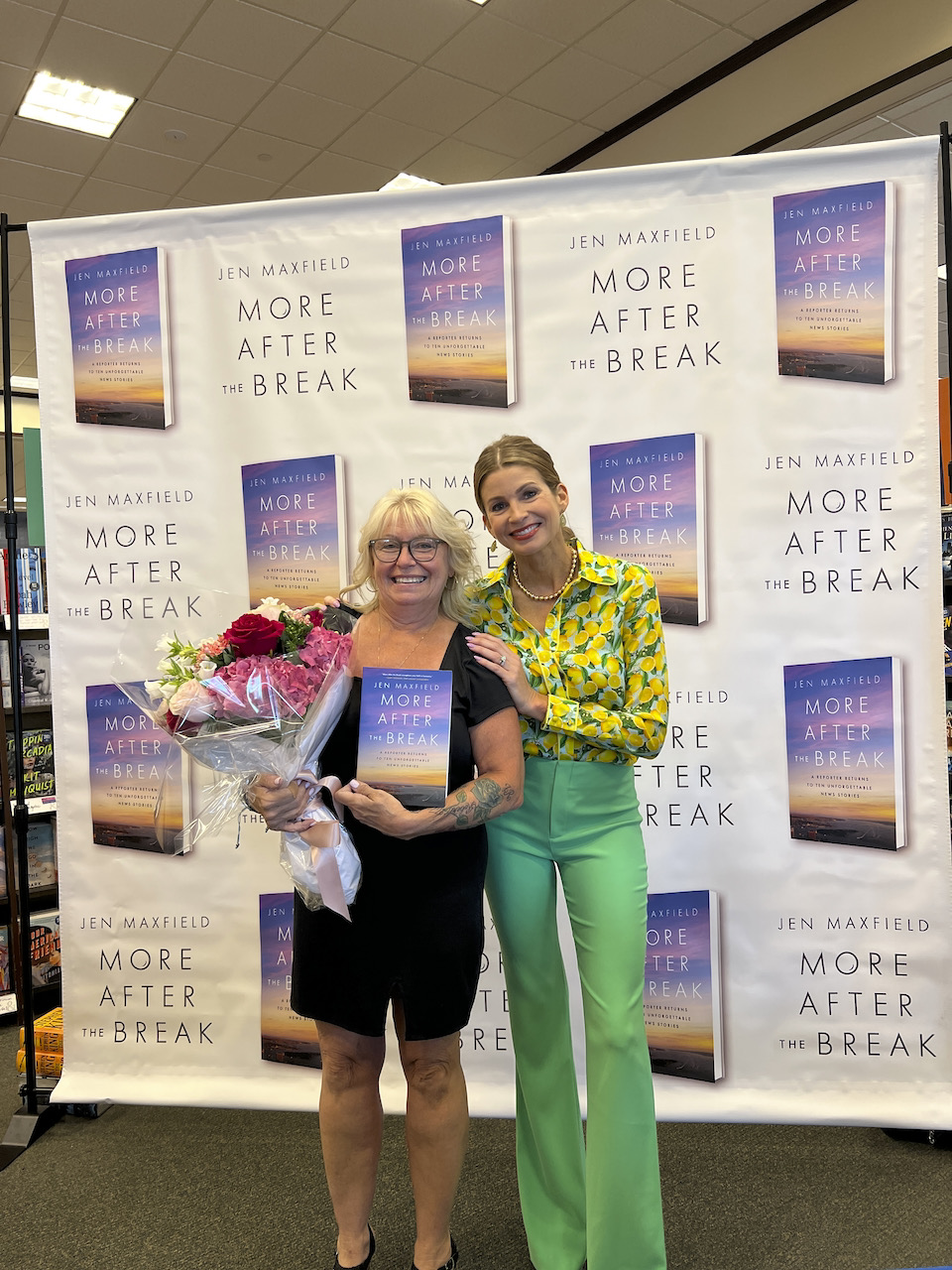