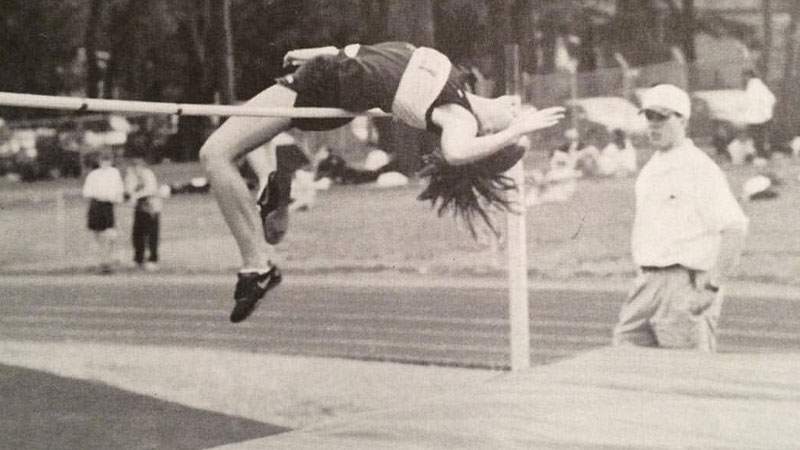 It’s happened a couple of times now: a local dad has approached me around town to tell me that his daughter is going to break my high jump record. Most of the time someone I don’t know recognizes me and stops to chat, it’s to discuss a news story I’ve covered or to ask me if I know the hosts of the TODAY show (I don’t). But this dad wanted to talk about high school track. Every time he brought up his teenage daughter, my response was the same. “That’s wonderful,” I told him. “I wish her lots of luck.”

The way I set the Tenafly High School high jump record back in 1995 is a lesson in serendipity. As a freshman in the winter of 1991, I had been competing in hurdles races and was performing poorly. I was fast enough when my feet were on the ground, but every time I went to jump over the hurdle, I went way too high and wasted time in the air before landing and running again. One of my observant winter track coaches suggested I try the high jump.

It turned out that my ballet classes starting at age three had imbued me with enough body control, back flexibility, and leg strength to leap over a bar that was almost the same height as I was. Oh, and did I mention that the high jump includes clearing it backwards? My coaches promptly yanked me from the hurdles roster and began entering me in high jump competitions. By the time I was about to graduate from high school in the spring of 1995, I managed to break the previous record set in the late 1960s with a jump of 5’3”.

Until a friend mentioned that he saw my name on the track records plaque in the Tenafly High School gym a few years ago, I just assumed that the record had been broken when I was in college, grad school, or living in Upstate New York for my first jobs in TV news. But in fact, the record stood for a generation until it was broken by not one– but two young women within a span of a couple weeks in May of 2021. One of their mothers reached out to me on Instagram to let me know, and I arranged to meet the two athletes who cleared 5’4” at the Tenafly track the following week to congratulate them.

A few people asked if I was disappointed that my record was broken. At age 44, I was perfectly content to relinquish it. Records are made to be broken, after all. Norina and Rylie represent the gains in girls athletics in the past 25 years, with both young women having competed at high levels in track and field and basketball as middle school students, opportunities that did not exist in my hometown in the late 1980s. Visiting them at the track that sunny May afternoon, I made what I thought was a prudent decision and opted not to try the high jump for the first time in a quarter century. Instead, I watched them practice and marveled at how today’s young female athletes are raising the bar and making us seasoned competitors proud.