The Story Behind the Story: The Yellow School Bus Goes Green 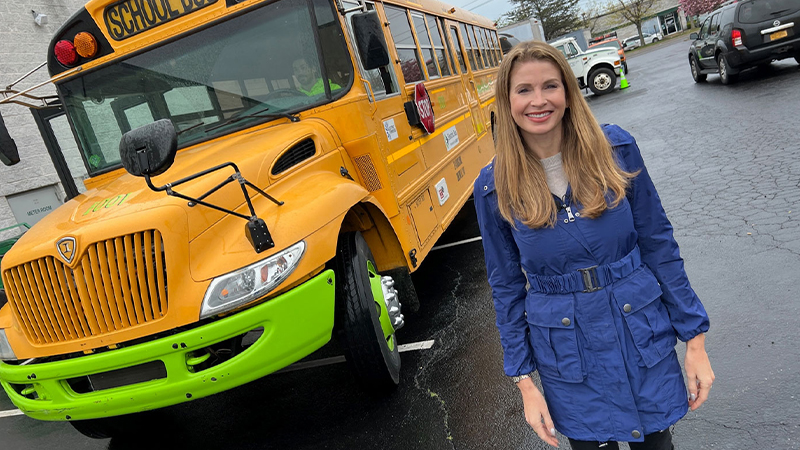 The Story Behind the Story The Yellow School Bus Goes Green

In this feature, I go back to stories I’ve reported for NBC NY and explain how we got them on the air.

When I hear that my next assignment is on Long Island, I worry. I check Waze. I analyze Google Maps days ahead of time, strategizing about exactly when I will need to leave my home in New Jersey to make it to our location on time. I know my Long Island friends would concur– traveling between New Jersey and Long Island, which involves some mix of bridges, tunnels, and traffic no matter what time you leave– is complicated. I left my home in Bergen County, New Jersey two-and-a-half hours before I needed to be at Unique Electric Solutions in Holbrook, New York on that Friday morning in May and barely made it on time. Between the pouring rain and the rush-hour traffic, I listened to multiple podcasts before pulling up to meet photojournalist Jeff Richardson, who is based on Long Island and had a much smoother commute.  The story had been set up ahead of time by Howard Price and Enez Paganuzzi, two of the most talented and hard-working people I have the pleasure of calling my friends and colleagues. The concept was about how school buses in New York State are starting to go “green,” due to a regulation that says all New York City school buses must be zero-emissions by 2035. Unique Electric Solutions (UES) is a local company that is “repowering” school buses– taking out their diesel engines and replacing them with electric batteries, delivering buses that plug in and charge just like electric cars. With new diesel buses hard to come by due to supply chain shortages, and new electric buses costing more than double the price of a “repowered” version, UES was seeing its business soar. Especially with diesel fuel prices at record levels.

Jeff and I spent hours at UES, getting interviews and video for what would ultimately be a story that ran less than three minutes. People who are with us out on assignment are frequently commenting on how much time and energy goes into such a short final product. Part of this is that Jeff and I want to “shoot now, edit later.” Until we understand the full scope of the story, we don’t want to edit down our questions or video, because you never know what you might discover. Jeff was also using both the broadcast camera and the smaller DJI pocket camera, which allowed him to get shots of the underside of the school bus when he (carefully) directed the school bus driver to drive over the camera that he had positioned on the street, and other close-up shots of the mechanics working. Jeff’s creativity really shines in the finished product.

Reporting the story about the yellow school bus going green reinforced one of the key reasons I pursued journalism as a career in the first place: to meet interesting people and learn new things from them. The story that aired gave our viewers a look inside a local business that is growing (and hiring!), insight into new technology, and a chance to see how the innovation was impacting kids in our area, as children in Brooklyn starting riding the “green” bus to school last month. It’s a story that was worth driving all the way to Long Island for.